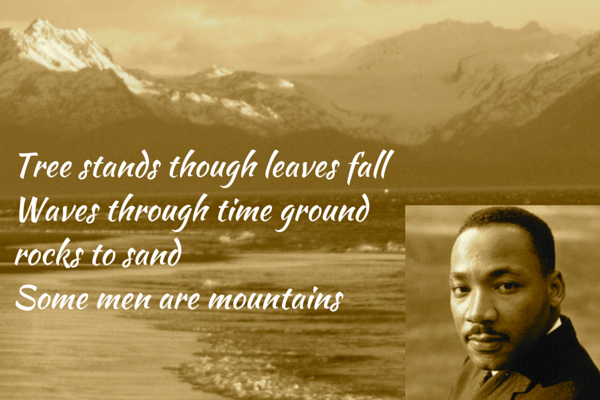 Doctor Martin Luther King, Jr., saw that still in the second half of the 20th century the descendants of slaves, on whose backs this country’s wealth was built, were still unable to enjoy the promised freedoms, equality, and pursuit of happiness written into the American constitution and law. He accepted the charge to work for the achievement of those promises for everyone. Doctor King is one of the few national American leaders to knowingly place his life in jeopardy for freedom, justice, and peace.

But, he did not begin the Civil Rights Movement. The courage and commitment to non-violence of thousands of black men, women, and children, and hundreds of people from other races and backgrounds, empowered Dr. King to emerge as the spokesperson and symbol of the movement.

Sadly, we have not achieved Doctor King’s ultimate goals – a country free from racism and bigotry and a world at peace. The lives of young black men still remain of less value than other citizens. But, we cannot deny that racial and social progress has been made. So here are five reasons to be grateful to observe M.L. King, Jr. Day.

The above reasons are just a snapshot of what the leadership of Dr. King and the courage of the civil rights movement achieved. Yet, just as this country’s democracy is still a work in progress, so we are still engaged in achieving full equality, justice, and rights for all black people in this country. To keep everyone aware of the continued racism and bigotry in this country and to press for some type of national racial reconciliation are other reasons to observe the Doctor King holiday.

I am grateful to be a black woman in the 21st century able to observe this holiday. As a minister, Doctor King often expressed gratitude in his own poetic way. One of his most well-known statement of thanks, though also a sad prophecy, reminds us to be grateful for what has been accomplished and like a beacon lights the way to carry on his charge.

Because I’ve been to the mountain top. And I don’t mind. Like any man, I would like to live a long life. Longevity has its place. But I’m not concerned about that now. I just want to do God’s will. And He’s allowed me to go up to the mountain. And I’ve looked over. And I’ve seen the promised land. I may not get there with you. But I want you to know tonight, that we, as a people will get to the promised land. And I’m happy, tonight. I’m not worried about anything. I’m not fearing any man. Mine eyes have seen the glory of the coming of the Lord.

So, today, in honor of the work Dr. King began and to continue his legacy, I offer, a free gift to you, Gratitude 100, A Simple Practice for Fulfillment, Balance, and Happiness. To join me in this gratitude journey, Click Here.